← Back to the prize winners

Officially, Karl Beaudelere first saw the light of day in Marseilles in 1965. He adopted his name in honour of the French poet Claude Baudelaire, whom he deeply admires and whom, through the reading of his poetry, he considers having been a flayed soul much like himself. Indeed, Karl has composed a magic square consisting of the dates of the poet’s birth and death, along with his own birthdate and his “whatever” date, 15 June 2011. For some years now he has also taken to signing his works as “KXB7”. Art is Karl’s vocation: he draws; stencils on the walls of his town; and produces sculptures in silkscreen-printed plexiglass. In 2011, he produced his first self-portraits in ballpoint pen. In 2013, he encountered Françoise Monnin, editor-in-chief of the magazine Artension: the starting point of a collaboration which would lead, in 2015, to his first exhibition at the Hervé Courtaigne Gallery in Paris, where he is still exhibited to this day. The Guignard Foundation was particularly determined to reward and support this talented, unusual and endearing artist. In return and as a measure of his gratitude, Karl made a significant donation of sketches to the Art Brut Collection, which already possessed a number of them, some of which it had exhibited in its “Acquisitions 2012 – 2018” exhibition.

The self-portrait in the work of Karl Beaudelere

The portrait, and especially the self-portrait – the mirrored reflection, the magic of the gaze – is a fascinating genre that since the Renaissance has continually reinvented itself within the tradition of figurative representation. Karl Beaudelere has become part of that history thanks to his singular and original interference with the mirror and its painting, as well as by a pictural problematization of the form’s paradoxical subvertion of objectification. He abandons himself body and soul to a high-tension artistic adventure that could well be characterised as constituting an alternating current between hyper-objectivity and exorcism, outsider aesthetics and what one might be tempted to associate to contemporary art and between the particularity of his personal experience and the universality of his graphic approach. Such expression cannot be achieved without the elaboration of an original figurative language – paradoxical in its virtuosity – freed from old mimetic recipes, and all the more expressive for it. Does his almost exclusive use of ball-point pen result from a choice or simply poverty? If the latter is the case, he has made a virtue of necessity: using the ink line not as a figurative boundary, but rather as a line of melody, turning obsessively about upon itself until it has, by some enchantment, generated the unrepresentable – a line not enclosing but liberating, structuring and de-structuring his face. (Michel Thévoz) 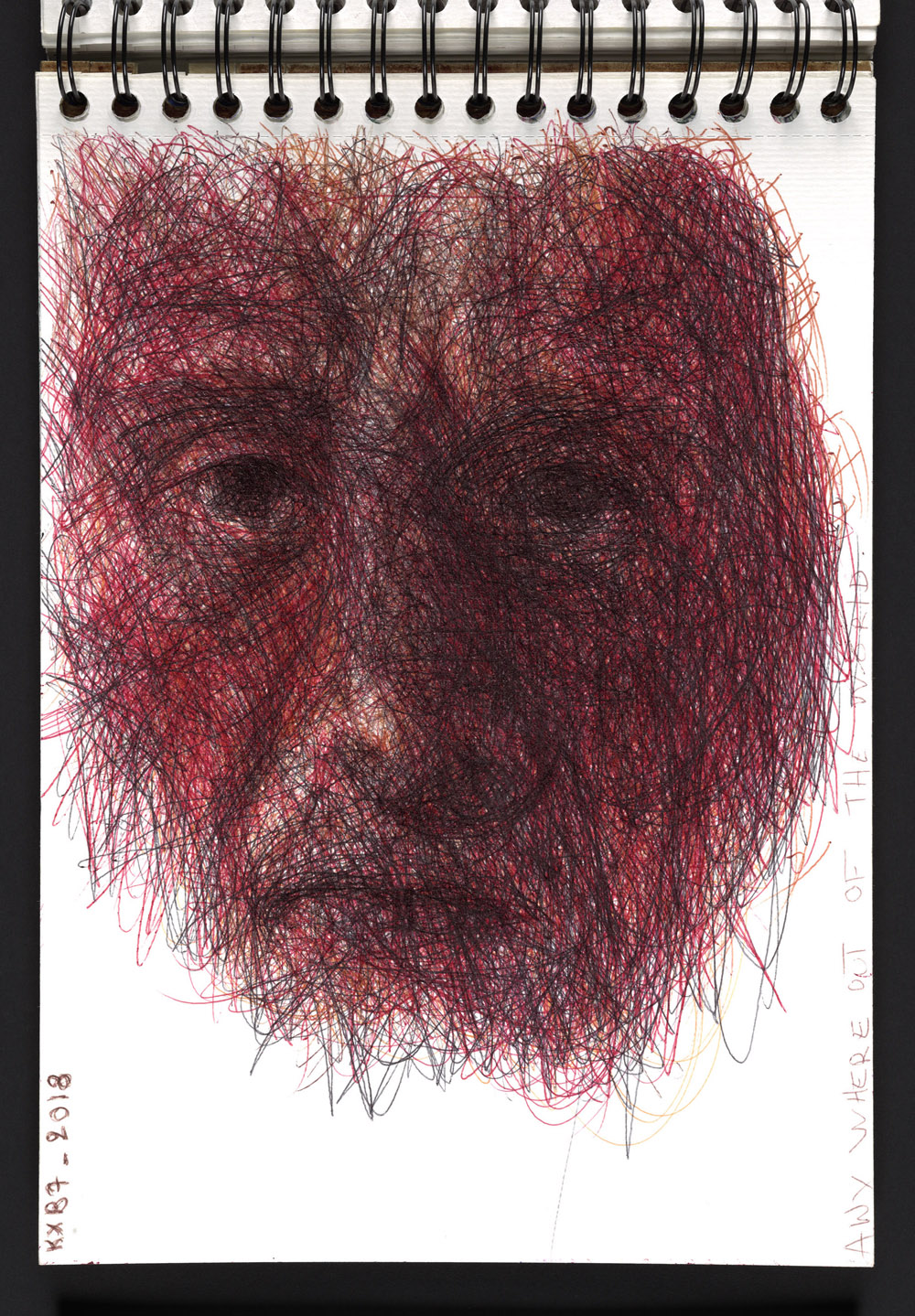